If Microsoft made cars, goes the story. And it’s been ringing true for so long. 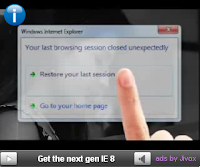 I was reminded of this story, because I saw a web ad for MS’s masterpiece browser Internet Explorer 8 today. The storyline of the ad goes thus: a lissome damsel in a frock is busy eating a sandwich in such an engrossed manner that would remind you of good ol’ Liv Tyler, while our hero is busy watching her from a distance. In the midst of this, we see the worried hero trying to look around an insurmountable obstacle, followed by the text “Fantasies can crash”. And then we see a rather rotund gentleman just standing between the two, while all we and our hero can see is his posterior. Then the hero starts making faces, from which I can only guess that the rotund gentleman has just performed an act with his posterior which causes considerable noise & air pollution.

We then see the Vista-esque dialog box asking whether you want to restore your last session or go to your homepage. And then we are informed about the groundbreaking new innovation in the new IE8 – Automatic Crash Recovery (where is the ™ guys?)!!! Of course now you are dying to use the new & improved IE8 right? With this automatic crash recovery feature that was not present so far in the IE, IE is now complete and can take on the other browsers like Firefox, Opera, Safari and Chrome, which anyways used to restore crashed browsing sessions (they can even save sessions when you are closing the window, if you preferred). Heck, even MS’s Office software do a half-decent amount of crash recovery.

But the best part of the ad is the sort of self-aware admission that “Fantasies can crash”. Refreshing to see MS admitting in their promotion itself that their software crashes, and we have to just live with it. But look at the new shiny feature — Automatic Crash Recovery! Don’t you just love the IE, now that it can restore your session after crashing it? Make it more stable and reduce crashes you said? No sir, can’t do. We’d much rather advertise the most irritating thing we can show you — our crash screen telling you that your browser crashed last time you opened it.

Coming back to cars, wonder if cars advertised like this. “Your car can crash or break down, but look at this feature — it puts you back on the road you were going on (after 3 months in the hospital or garage maybe)”. Do you want to advertise that your product does not fail (or that you have made efforts to prevent it from failing), or do you advertise that your product can fail, there’s nothing wrong with it, just look what we have added — it remembers what you were doing when it failed.

And then there is the copy — “Let’s you start from where you had stopped”. Weren’t copywriters supposed to be good at language? But then maybe in the new age of freestyle apostrophe usage, I am a purist.

Photographer & blogger at Recaptured. View all posts by Amit

This site uses Akismet to reduce spam. Learn how your comment data is processed.