Did you like shooting macros with your kit lens reversed? I’m sure you did.

But there are some shortcomings with that particular method of shooting macros. Number one is that you cannot use filters while shooting that way. And if you are fortunate enough to possess a ring-flash, using that with that setup is pretty much ruled out as well. Add to that the fact that you have the lens mounted on the focussing barrel and not the lens body, which is in some cases not advisable. So how do you shoot macros without reversing the lens (or shelling out money on a macro lens either)?

Remember I had shown you an extension tube the last time around? The tube at one end of which lied your reversal ring? So if you had bought an extension tube instead of just a reversal ring, you’re in luck this time. If you had not, then go out an buy an extension tube for your camera mount. It comes in 5 pieces, one each for the male and female mount, and three rings of different sizes to give you the freedom to vary the size of your tube.

Mount the lens on one end of the tube and mount the whole setup on the body. But wait… isn’t the picture through the viewfinder dark like night? Don’t worry. Just follow the instructions…

Get a tube of superglue and a short stick-like metallic object – I used a simple paper pin. Now unscrew just the female mount from the tube (it is the mount resembling the one on your body, on which the lens would mount), and mount one of your lenses on it. Now when you see the open (mounted) end of the lens and the mount-ring, you’ll see a lever (see diagram) protruding from the lens’s base – this is the same lever that adjusts your aperture as mentioned in the previous tutorial. Use a permanent marker or a chalk to mark the position of this lever on the ring when this lever is fully depressed, i.e. the aperture is wide-open. Now measure that pin I asked you to get so that the distance you measure is shorter than the distance between the lens’s inner bevel and the mount’s screw threads, but slightly longer than the distance between the screw threads and the lever. Bend off the remaining part, so that the pin is now in L-shape, with one of the ends being the length that I just told you about. Unmount the lens, squeeze out some superglue on the base thread of the mount just around the mark you made and place this pin, so that the prescribed length sticks out perpendicular from the circumference of the threads. The idea is that when this dries out and is fixed, when you mount the lens on this ring, this pin would move the lever to the position that the aperture is fully open.

When dried, the ring would look like the picture shown here.
Now mount the lens on this ring and make sure the lever moves back as intended (refer to the first picture). Adjust the lens to 50mm focal length, screw the wider ring on this mount and screw the male mount on that ring, so that you’re left with a tube that is around half the size of the ring you bought 🙂
Mount this setup on your body, set the focus mode to manual, set the camera mode to manual (M), and start shooting as you did while following the last tutorial.

You can now use filters and a ring flash if you have one. 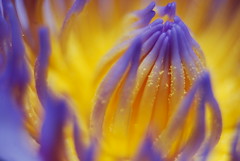 Here’s a shot that I clicked using this setup. And don’t forget to drop in URLs to the photographs you’ve clicked this way.

Photographer & blogger at Recaptured. View all posts by Amit

This site uses Akismet to reduce spam. Learn how your comment data is processed.